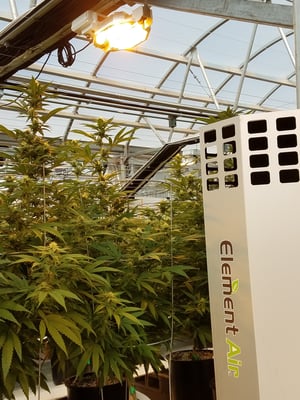 On Monday, November 26, 2018, I had the pleasure of traveling to Kingsville, Ontario to speak before the City of Kingsville. A proposal was being considered by the City Council to allow a cultivation facility within their city limits. The final hurdle for the owner’s Application for Site Plan Approval was to receive approval of their odor mitigation system.

Mitigating the odor from commercial cannabis cultivation facilities is a legitimate concern for cities and regions that are considering allowing facilities to operate within their jurisdictions. As the Director of Environmental Sciences at urban-gro, my team and I work with cultivators around the country to develop compliant and effective odor mitigation programs using tested best-in-class products and solutions.

Having designed the odor mitigation system for the Kingsville cultivation facility seeking approval, I was invited by the city to present to the City Council on the odor control plan and field questions from the Council and citizens. Given our track record of successfully utilizing Element Air technologies across the United States, I was able to demonstrate the effectiveness of the proposed program using data and outcomes from similar facilities.

After making the presentation to the City Planner, I was then invited to attend the Council meeting to review the program and answer questions about the Element Air system. The City planner offered the case studies and testimonials we had provided ahead of the question and answer session requested by the Mayor. I answered questions from the Mayor, several Council members, and residents of the community on how the system works, its effectiveness, and whether they—or their properties—would be personally impacted. I explained that the Element Air system functions as an active mitigation system and demonstrated how it differs from a passive or "masking" system.

Following the presentation and a 20-minute question and answer period, the Council voted on whether or not to approve the cultivation facility's application. The final vote for Site Approval Application was 9-1 in favor, meaning that the facility now has the approval required and community support it needs to move plans forward.